The work of mine I’d most like to see performed. 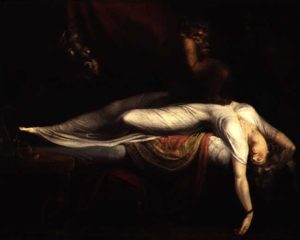 Two inspirations for the opera (which is based on the 1811 Mary Shelley novel, not the famous film):

The Creature dying all alone on the polar ice (Mary Shelley’s ending), with his heartbeat fading away in my music.

And I asked myself…what if Verdi or Bellini had set Frankenstein to music? Could I write a modern version of what they might have done, full of high notes and dramatic melody?

For a taste of what I did, here’s a quintet from Act 1. Five troubled people, lost in their thoughts…a storm coming…the music speaks for itself.

Read the libretto, by the late science fiction writer, novelist, and poet Thomas M. Disch, who had such a fine ear for the heightened emotion of 19th century poetry. (The Quintet is on page 11.)

And here’s a complete performance of Act 1, from the VOX performance. Jan Opalach completes the cast as the Creature.

Before the opera starts, Victor Frankenstein (baritone) has built his creature all alone, in secret. When it comes to life, he’s terrified, and runs away.

We first see Victor (baritone), sick and delirious, tended by his friend Henry (tenor). He thinks he sees the Creature he abandoned. He awakens, and with a great outburst of hope, says he’ll go home to his fiancée, Elizabeth.

Next we meet Elizabeth (soprano), mourning with her friends by the grave of a servant who was hanged for killing Victor’s brother, a young child. Only Elizabeth believes the servant was innocent. With a surge of joy, she learns that Victor has returned, tended now by both Henry and his father. But he’s so hesitant that no one knows what to do. (Here’s the Quintet.)

Night falls. A storm is rising. All but Victor leave. From the darkness comes the Creature (bass-baritone), who tells Victor that it killed the child, and will kill again unless Victor builds it a mate. 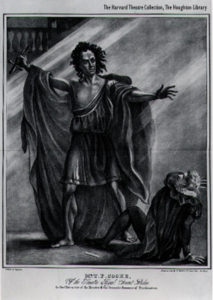 Victor has made the female creature, working once again in secret, and has brought it to life. In a sitting room outside his workshop, Elizabeth reminds him of happier times. His father, Henry, and some friends come in, trying to persuade him to at last marry Elizabeth. He gives in. Once more alone, he goes into his workshop and kills the female creature, who dies offstage with a horrible scream.

The next scene is ghastly. On their wedding night, Elizabeth waits for Victor in their bedroom. Instead the Creature comes and kills her.

Victor and Henry have hired a ship, with a rough crew of sailors, to pursue the Creature to the frozen north. Henry thinks Victor has gone insane, and tries to bribe the crew to go no further. But his plan fails. Victor kills Henry, and the crew swear to follow him anywhere.

And now the opera ends. We see the Creature, surrounded by the bodies of Victor and the crew, whom it slaughtered. It curses its creator and curses all humanity. In a failing voice, it curses itself, and dies alone on the polar ice.

The complete opera, from a terrific workshop performance with piano:

Henry, his friend, tenor (any fach, above a purely lyric tenor)

Elizabeth, his fiancee, soprano (I hear her as a light spinto, a Violetta or Luisa Miller)

The Creature, bass-baritone (has to be physically large, of course should have a big voice).

Victor’s father/A mad friar, bass (could be two singers, but can be doubled easily by one)

Workshop performances in 1979, 1980, and 1981, of first one scene, then the first act, then the complete work. At the Lake George Opera Festival and C.W. Post College.

Concert reading/performance, with orchestra, at the New York City Opera VOX workshop in 2003.

Because I haven’t been an active composer, I haven’t pushed for more. But now it’s time.