I’m a thinker, a teacher, and an artist. Always learning, always expanding what I do. Always trying to help.

I can help you understand classical music’s future. Find out what I think. Let me help you adapt.

A happy memory comes to life. 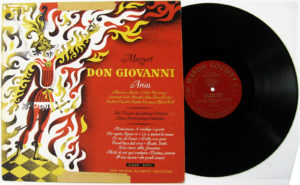 My life in music, and with it my long musical career — this is where it started. With this LP, which an uncle I barely knew gave me for my ninth birthday, in 1952. Arias from Don Giovanni. From the first complete LP recording of the opera, on the small Haydn Society label.

At first I wouldn’t listen to it. But when my father played it, I fell in love. And I was launched. For almost 70 years, right up to now, I’ve remembered that album cover. I wanted to see it again, looked online for an image of it, and found the album itself for sale on Ebay.

Of course I bought it. How could I resist?

I especially wanted the image because I’ve started a book about my life in music, and also about what’s been my big professional subject, classical music’s future. The two threads combine, because both inside me and in the world at large, classical music and pop coexist, with pop music gaining over classical as time goes on, gaining in both interest, and in artistic importance.

More on that another time.  More on how at nine I fell in love with opera, and when I was 11 came to love rock & roll. And onwards from there.

But today what matters to me is that album cover, with the texts of the arias on the back, in both Italian and English. I wanted to include the image in the book, and now I can.

The performance was recorded in 1950 in Vienna, with the city still devastated after World War II. And so a place where classical recordings could be cheaply made.

On this one are singers, mostly young, who were active in Vienna at the time. But one non-Viennese, the Italian baritone Mariano Stabile in the title role, was an inspired art-house choice (to use a current movie metaphor). He was 60, and an inspired choice because even past his prime and maybe needing work, he’d been, among the singers of his age, one of the greatest actors. He was Toscanini’s choice as Falstaff; as Don Giovanni he’d made a great sensation, as far back as the 1920s.

He stands out on this recording, for his drama and his quick Italian, though also, maybe not so memorably, for sounding dryer than the other singers (because of his age, of course, because in recordings made when he was younger, he doesn’t sound so dry).

And I heard those differences, even at age nine, though of course I couldn’t describe or understand them as I do now. But kudos for kid me. I was ready for my life in music.